Queen’s Park, November 3, 2015 - Ontario’s acting Environmental Commissioner, Ellen Schwartzel, says the provincial government is recovering only a tiny fraction of its management costs for the water supplied to many industries.

In her Annual Report, “Small Things Matter,” released today, Schwartzel noted there’s been no progress by the government on recovering the full cost of its water programs from users. “I am frustrated the Ministry of the Environment and Climate Change has yet to act on recommendations of both the Environmental Commissioner and the Drummond Commission,” says Schwartzel.

Currently, the government recovers only 1.2% of the $16.2 million it spends on water quantity management programs. “Not only do most industries get a total free ride,” says Schwartzel, “but the few industries that do pay are charged only $3.71 for every million litres of water they take. This small charge works out to less than $10 for enough water to fill an Olympic-size swimming pool.”

The acting Commissioner also says the Ministry of the Environment and Climate Change should be more open and transparent when issuing water-taking permits. “Right now, only about a quarter of all water-taking permits are posted for public comment on the province’s Environmental Registry. Permits for municipal or agricultural uses, or ones that last for less than a year, are never shared with the public, and many of these are for high-risk uses. And even when permits are posted for public comment, they don’t always have the necessary information.”

Schwartzel says there is good reason for more public scrutiny of water takings in Ontario: there are indications that increasing water demand from a growing population is reducing the baseline water flows for some streams and rivers.

“Ecosystems in some parts of the Grand River watershed are periodically stressed by low water levels” says the acting Environmental Commissioner, “and the base flow of the East Holland River near Lake Simcoe has been declining for decades. We can no longer take our province’s water supplies for granted.”

The Environmental Commissioner’s review of Ontario’s water-taking program can be found in Parts 3.3 and 3.4 of the report “Small Things Matter,” which can be downloaded at eco.on.ca. 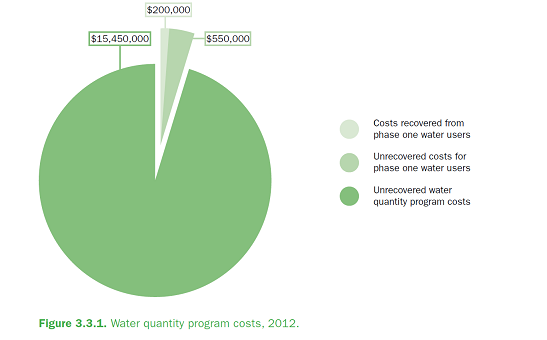 The Environmental Commissioner of Ontario is the province's independent environmental watchdog. Appointed by the Legislative Assembly, the ECO monitors and reports on compliance with the Environmental Bill of Rights, the government's progress in reducing greenhouse gas emissions and its actions towards achieving greater energy conservation in Ontario.