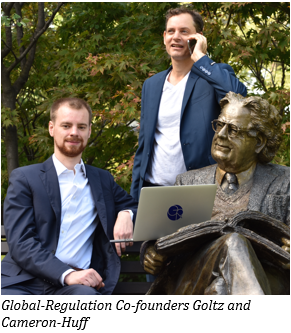 Global-Regulation emerged out of research at Osgoode School of Law (York University) in Toronto, Canada. The two Founders are Nachshon Goltz, an Israeli lawyer turned Ph.D. candidate at Osgoode Law School and Addison Cameron-Huff, a Canadian tech lawyer and award-winning programmer. Mr. Goltz, who is completing his Ph.D. in regulation, knows that, “Google does not cater to government regulators.”

“We are helping the people who write our laws by giving them the tools they know they need but no one is making,” notes Mr. Cameron-Huff.

Global-Regulation has 100,000 more laws in the pipeline and aim to have more than half a million laws available in 2016. The current database would exceed 5 million printed pages and would be a stack as high as the CN Tower.

The service is available for limited free use by the public at www.global-regulation.com.

Background Information on Global-Regulation Inc.
Global-Regulation Inc. is a software company based out of Toronto, Canada based on academic research at Osgoode Hall Law School, York University, Canada. The founders are two lawyers: one trained in Canada the other in Israel. Mr. Cameron-Huff brings a decade of software development work to the venture and Mr. Goltz is completing his Ph.D in regulation and law. Early users of global-regulation.com include universities in the United States and two levels of the Canadian government.